Common Challenges of Translation for Russia

Russia is big, in terms of size and population. To be more precise, Russia is the largest country in the world, nearly double the size of the United States. The country comes in at number eight in terms of population size and second when ranked economically among European countries. Although there are problems arising out of the United States and Russia imposing economic sanctions on each other since 2014, Russia is a growth market, and many international companies have realized the importance of localization in Russia.

Localization in Russia is Challenging Google

The leading search engine in Russia is Yandex (Yandex.ru) even though (unlike China) Russia does not block Google. Yandex manages to outcompete Google because it naturally has a better understanding of the Russian language and culture. The leading social media platform is Vkontakte (Vk.ru) which is very similar to Facebook.

Russian is the main language of about 166 million people. It is the official language of Russia, Belarus, Kazakhstan, and Kyrgyzstan. Russian belongs to the Slavic group of languages and is a close relative of Belarusian and Ukrainian.

The Many Pitfalls of Localization in Russia

Translating content into Russian from English presents a big challenge. There are the Cyrillic characters to cope with and the differences in the spellings of nouns depending on how they are used. In addition, the process of converting brand names into Cyrillic characters (transliteration) is beset with booby traps for the unwary.

In Russian, the end syllables of proper names can change to reflect up to nine different grammatical cases. This includes company names and brand names – they will change depending on the situation. For example:

It’s obviously tempting for companies to make life easier for themselves and just stick with one case. However, this will sound odd to Russian ears, so if you localize your content more effectively you will be regarded as more consumer friendly.

The following behaviors are considered to be signs of bad manners or rudeness in Russia and should not appear in graphics or photographs on your website.

Russian is “wordier” than English. Up to four Russian words might be needed to translate one English word. And some English words have no adequate Russian equivalent – e.g., efficiency, privacy, take care. Also, Russians like to express themselves negatively. For instance, a Russian will not say something is big, but rather it is not small.

Use Localize to Meet the Challenges of Localization in Russia

Effectively localizing your contact for a Russian audience means utilizing the services of a native Russian speaker. With Localize, your expert Russian translator can work on our platform. Or, you can choose to utilize our built-in integrations with our LSP partners Gengo and Textmasters. With our expert assistance, you can be sure of the best translations of the difficult Russian language. Contact us to learn more.

If you are curious about Taiwan, you’re not alone. The cultures of the world are fascinating in their 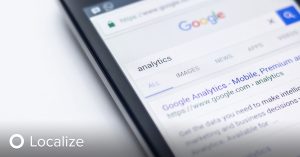