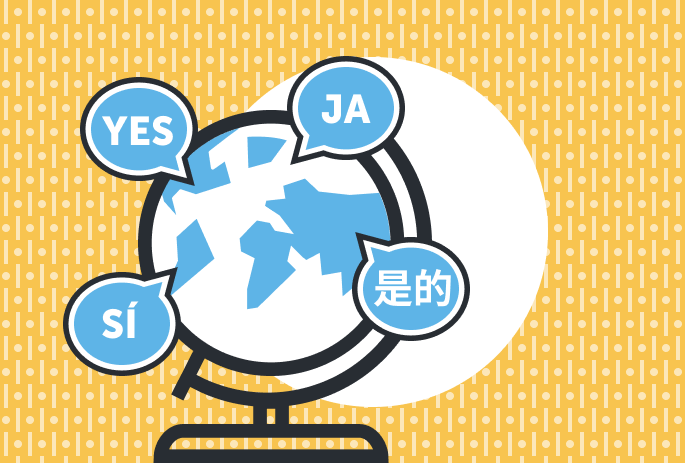 When you launch a website for international audiences, it’s crucial to pick the right languages for translation and localization. With thousands of different languages spoken around the world, it’s hard to know where to start.

Luckily, there are a few common languages that are spoken by a considerable proportion of the globe. Translating and localizing your website for these languages can help you tap into big new markets quickly.

So, without further ado, here are the top languages to consider when localizing your website.

English is the most universally spoken language in the world, so it’s no surprise that it’s one of the top 10 languages for website localization. Apart from the 67 English-speaking nations, 27 other countries use English as their official business language. Additionally, the number of internet users who consume online content exclusively in English stands at over 25%.

After English, Chinese has one of the highest user bases in the world. There are over 1 billion native speakers. Some researchers believe that Mandarin Chinese is the world’s fastest-growing language. Over 19.8% of internet users speak and write in Chinese – both the simplified and traditional versions. As of 2022, China is the biggest eCommerce market in the world.

You might think that Spanish is spoken primarily in Latin America and some parts of North America, like Mexico. But Spanish usage is growing around the world. Today, 500 million people use Spanish as a primary language in their personal and professional lives. 7.6% of all internet users are native Spanish speakers, and 4.6% look exclusively for Spanish content.

As one of the largest and most populous countries in the world, India is a lucrative market for global brands. Hindi is the unofficial primary language for communication in many states. India has many languages, but over 43% of the population regards Hindi as their native language.

About 6.4% of all content on the web is in Russian, and about 260 million people are currently consuming Russian content online. Russia is one of the world’s largest economies.

Just a few years ago, Arabic had the least amount of representation on the internet. But times have changed, and today Arabic is one of the most critical languages for website localization. Over 5% of all internet users use Arabic as a primary language. With your website translated into Arabic and localized for specific Arabic-speaking countries, you can target not only the Middle East but also a large part of Africa.

The Latin American region is a significant contributor to the global economy, and Portuguese has become important for today’s globalization strategies. Portugal is a common language for several countries around the world including Brazil, Angola, and Mozambique. About 4.1% of all internet users actively communicate in Portuguese.

Indonesia and Malaysia are experiencing higher internet and mobile device usage than ever. This corresponds with an increase in people looking for content in the Malay language. Over 274 million people speak Bahasa/Malay, while 2.9% of web surfers browse exclusively in the Malay language.

French is another popular language across the globe. 29 countries use French as their official language. France is the second-largest eCommerce market in Europe. To tap into these markets, you’ll need to translate and localize your content into French.

Finally, there is German, which is the 10th most widely-spoken language in the world. 5.6% of all internet content online is in German. Six countries use German as their primary language. Localizing for Germany can be lucrative since it’s the largest eCommerce market in Europe.

At Localize, our translation management system (TMS) supports hundreds of language pairs and can help you kickstart your website localization. Localize integrates with popular translation services and LSPs to seamlessly manage your translation workflows.

Contact us to find out how we can help you tap into new target markets all over the globe.